Millennium Records president Jimmy Ienner, made perhaps the dumbest decision of his entire career, refusing the demo of Madonna.

He wrote that while he "enjoyed listening to Madonna"and liked several of his songs, he thought, "I do not feel that she is ready yet."
Does your verdict? "I will for now, but wait for more."

Of course, Ienner never got a second chance ... Sire Madonna released her debut album a few years later, and the rest is history.

A look at the lyrics: 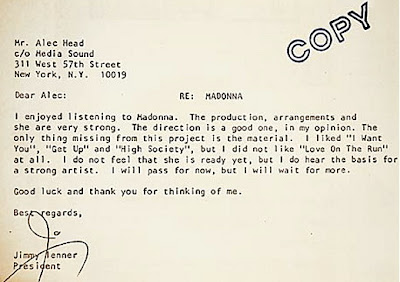 It is without doubt the biggest mistake of his career.
Share
Followers 0