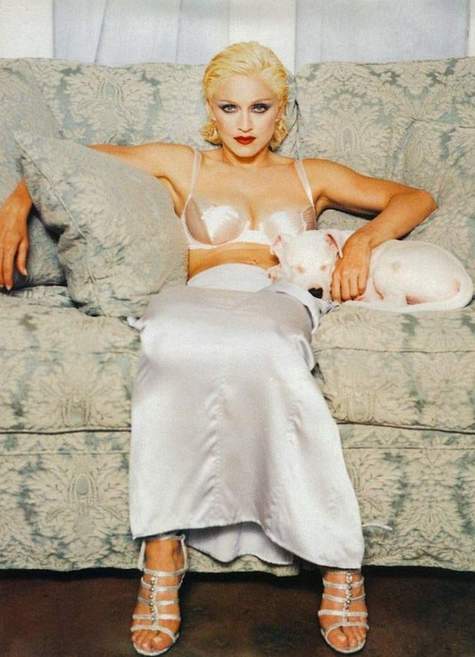 "Bedtime Story" was a collaboration of sorts between Madonna and Icelandic popstar Björk. A fan of Björk's solo work, Madonna harbored intentions of working with her, although Björk declined the opportunity of co-operation, instinctively feeling it would be wrong. The Bedtime Stories album co-producer, Nellee Hooper (also responsible for co-production of Björk's early solo work) asked Björk to contribute to the album sessions, leading to her contribution of the demo "Let's Get Unconscious" especially written for Madonna, which would ultimately become the album's title track. Both Hooper and De Vries changed the composition significantly enough to gain co-writing credits. The lyrics to "Bedtime Story" are Björk's own criticism of Madonna's aesthetic.[1] For a Madonna dance record, the song is somewhat unconventional. A minimal trance backing is used and the lyrics deal with a journey into the subconscious. The song was a top five success in markets such as the UK and Australia, as well as being a dance club hit, but in the US the song peaked at number forty-two becoming the first Madonna single since 1983's "Burning Up" to not reach the top-forty. Some Madonna fans, in retrospect, have cited the structure of "Bedtime Story" as a precursor to the progressive, electronica-based sound that would follow three years later with Madonna's next studio album, Ray of Light. Issued as the third single from the Bedtime Stories album, the song received full remix treatment. Alongside the single edit of the song, a number of dance remixes were commissioned, including two by Junior Vasquez (rumoured to be Madonna's favourite dance music producer of the time, but in 1996 they had a public falling out) and Orbital. Jason Nevins has also remixed the song, confirmed from his website, but was never commercially released, and was only on a white label record containing various other remixes of his. Famous DJ Richard Morel did a remix for the song (Morel's Pink Noise Bootleg Mix) and leaked it on his website. The video, directed by Mark Romanek, premiered as an MTV special entitled "Madonna's Bedtime Story Pajama Party", in which Madonna read a bedtime story inside NYC's Webster Hall to a select audience of invitees (all dressed in bedtime and clubkid wares). The video was, at the time, the most expensive video ever made, costing $5 million [1] . As recently as 2005, the video has been screened in contemporary art galleries (including the Museum of Modern Art, where it is stored in the permanent collection along with another video directed by Romanek for the Nine Inch Nails song Closer), and is now often considered to be one of the strongest examples of the music video medium. The single was performed live at the 1995 BRIT Awards in London, with a Lady Godiva inspired look to match. It was Madonna's first performance at the "Brits". It coincided with the newly remixed single release in the UK, always a strong market for dance music, hitting number-four. Though the song was not included in her Drowned World Tour, Madonna re-embraced the song (in fact, a reworking of the Orbital remix) in time for her Re-Invention Tour, using it as an interlude, with a new video directed by Dago Gonzalez. In this video Madonna appears with long, straight blonde hair, with white stallions running through deserts intertwined with footage of the singer. Though Björk wrote the song for Madonna, she would go on to use some of the lyrics for her B-side "Sweet Intuition", which was eventually released, later in 1995. A distorted vocal sample from Bedtime Story was added by Nellee Hooper for the remix of 1996 Garbage single, #1 Crush, at the beginning of the song.

The video, like the song, is one of Madonna's most experimental. It visualizes the concept of the song, showing images that seem like a dream or some other state of unconsciousness. Madonna - wearing a variety of blonde wigs - floats through the air, gives birth to doves and lays down on a surreal operation table. At the end of the video, her face is shown, with eyes and mouth in switched position, inspired by Frida Kahlo's paintings. Madonna said in an 1999 interview with Aperture magazine interesting insight into the video: "My Bedtime Story video was completely inspired by all the female surrealist painters like Leonora Carrington and Remedios Varo. There's that one shot where my hands are up in the air and stars are spinning around me. And me flying through the hallway with my hair trailing behind me, the birds flying out of my open robe - all of those images were an homage to female surrealist painters; there's a little bit of Frida Kahlo in there, too." MadonnaOnline.ch interviews Directed by acclaimed director Mark Romanek (who would later directed the infamous "Scream" music video for Michael Jackson), the video is considered to be one of Madonna's most artistic videos. It was shot at Universal Studios in Universal City, California from December 5-10, 1994. The video was later acquired for the New York Museum of Modern Art's film and video collection.

A new remix version of "Bedtime Story" was used as a video interlude during Madonna's Re-Invention World Tour 2004. The video was shot in April 2004 at Culver Studios in Culver City, California and contains various images of Madonna using white custom in front of a mirror and resting on a big scanner with a beautiful white horse running on a white desert. This video has never been commercially released.