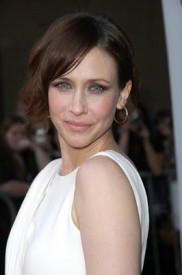 Vera Farmiga is looking forward to possibly working with Madonna, even though she’s never seen any of her film work.

The Up in the Air actress said she was delighted Madonna asked her to star in W.E., a project the singer is producing, co-writing and directing. The film tells the story of the relationship between Britain’s King Edward VIII and Wallis Simpson, the Duchess of Windsor.

“She approached me. We sat for a cup of tea and again for a cup of tea. Hopefully, it will all come together. I’m actually not familiar with her work, and I told her this flat-out. She sent a couple of films and I still haven’t seen them,” Farmiga said. “But no matter. I don’t really go by that. I go by other things. I go by scripts. I go with what I think I can do with a character and if I feel a kinetic energy with someone and I feel we can uplift and challenge each other.”

Vera, 36, isn’t bothered that Madonna‘s only other directorial project, 2008’s Filth and Wisdom, was panned by critics because she understands that everyone has early work which won’t necessarily be a success.

“I certainly have things I wouldn’t want people to see,” she admitted to E! Online.