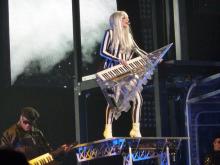 Lady Gaga's first concert in Britain on her revamped "Monster Ball" tour was hit with a string of setbacks after several costumes and parts of the set went missing and technical mishaps marred the show.

The "Poker Face" hitmaker wrapped up her dates in America last month and brought the tour to the U.K. with an all-new stage set and concept for the British gigs.

But the opening show in Manchester, England on Thursday night was hit with problems after key pieces of the stage, props and costumes failed to arrive at the MEN Arena venue in time.

A source tells British newspaper the Daily Mirror, "Right up until the wire there was a mad panic. Gaga lived up to her name when she arrived to find half her costumes had not arrived and pieces of the set were missing. She has spent over a million pounds on this new stage show so she was furious that everything wasn't in place."

The singer took to the stage 40 minutes late and the show was marred by technical problems including missed lighting cues and an improperly balance sound mix, according to the BBC.

Lady Gaga will take the tour to Ireland this weekend before bringing the concerts back to Britain for nine more dates, ending in Nottingham, England on March 8.