Designers face up to five years in jail if sent for trial, but prosecutor's request goes largely unreported in Italy 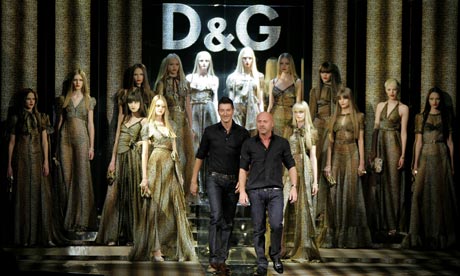 Stefano Gabbana and Domenico Dolce could face up to five years in jail if sent for trial over alleged tax evasion. Photograph: Thomas Concordia/WireImage

It has been called the potential "[tax] evasion of the century". But only once.

On 19 November, a Milan prosecutor asked for two of the most famous names in fashion – Domenico Dolce and Stefano Gabbana – to be put on trial. But there has been barely a murmur about it in the Italian press.

Dolce, Gabbana and their company are accused of dodging tax on income of more than €1bn (£850m) – an amount that dwarfs the sums in previous Italian celebrity tax scandals.

The affair is potentially highly embarrassing for the "Gilbert and George of Italian fashion", a duo whose sexy, baroque, often gilded designs have won the admiration and loyalty of celebrities including Victoria Beckham and Madonna.

Dolce and Gabbana are charged with defrauding the state over their taxes. If sent for trial, they risk being jailed for up to five years.

News of the prosecutor's request – which now goes before a judge – might therefore have been expected to be front-page news in Italy, and a staple for discussion on chatshows and in the paparazzi gossip mags.

And since it was barely reported in the Italian press, the story was missed by all but the specialist fashion media elsewhere, the sole exception in Britain being an online newspaper site.

It was much the same story in May 2009 when news of the impending investigation was first broken on the front page of Il Giornale, the Milan-based paper owned by the family of Italy's prime minister, Silvio Berlusconi.

Dagospia, a website that is the nearest thing Italy has to Private Eye, republished the scoop under a headline that asked: "How many will dare to pick up on this news?" The answer was two low-circulation leftwing dailies and some blogs, including the one that dubbed it the tax evasion case of the century.

Such lack of response prompted a reader of Il Giornale to write to the paper to express his amazement. "I expected the news ... to have caused uproar," wrote Giuseppe Vincenzi.

"I remember the case of Valentino Rossi [the Italian motorcycling ace]. It became a national issue. And now, on the other hand, I've heard nothing about an affair involving sums that are eight times greater, concerning two no less well-known personalities who ought to be keeping up Italy's name in the world. How? I'm beginning to think I dreamed it."

In a reply, Il Giornale's then editor speculated on the reasons why other papers had been so reluctant to cover the story.

"Might it not be because D&G spend a good deal of their money on full-page advertising in dailies?" he asked. Il Giornale, with its older reader profile, is rarely a target for Dolce & Gabbana campaigns, and is anyway backed by the Berlusconi family's billions.

Speculation apart, the respect commanded by the most famous initials in frocks is daunting. Last year Milan's mayor and council turned over city hall to them for a party and exhibition to celebrate the 20th anniversary of Dolce & Gabbana Uomo. The square that also houses Milan's fabled opera house, La Scala, was blocked off, and the trams that run through it were diverted.

The lone voice raised in protest was that of the councillor Basilio Rizzo, a follower of the iconoclastic Nobel prizewinning playwright and actor Dario Fo, who himself stood for mayor in 2006.

Earlier this month, before learning of the prosecutor's request, Rizzo had petitioned the mayor, asking for the two designers to be stripped of medals they were given by the city last year in recognition of their work, "since, in accordance with the bylaws, the recipients should be of unimpeachable conduct", he told the Guardian today.

Rizzo added: "I understand they were given a special rate for the use of the building on the grounds that it was a cultural event. I have since referred the matter to the audit court."

Dolce and Gabbana's relationship dates back to 1980. Possibly the biggest of their many breakthroughs came when Madonna asked them to design the outfits for her 1993 Girlie Show tour. By the mid-2000s, their group's turnover had topped €750m.

But, according to the petition submitted by Laura Pedio, the prosecutor who has been investigating them, not all of the profits were being declared in Italy.

Starting in 2004, the royalties on the partners' brands had been funnelled to a company in Luxembourg with a name formed from the first two letters of their names – Gado.

By paying the Grand Duchy's much lower rates of taxation, Pedio claims, each of the designers avoided Italian tax on €416m, while their company missed payments on a further €200m.

She has asked for Dolce's brother, Alfonso, two company executives and a tax adviser to be indicted too.

A spokeswoman for Dolce & Gabbana said she had no comment to make.

This is not the first controversy Dolce and Gabbana have weathered. Three years ago, they came under fire over an advertisement that was accused of exalting gang rape: it showed a woman being held down on the ground by a man while other men looked on.

In 2009, Giorgio Armani accused the couple of having copied from him a design for quilted trousers – a charge Dolce and Gabbana contemptuously dismissed.

"The Armani style was never a source of inspiration for us and it is years since we have bothered to watch his collections," they replied.

By then, neither had any need to rip off other people's ideas. Their own designs – many inspired by their common love of Sicily, where Dolce was born, others evoking images and styles from 1960s Italian cinema – had provided them with the basis for three immensely successful global brands.

Their Dolce&Gabbana line offers everything from haute couture and pret a porter gowns – "celebratory dresses for glamazons", Vogue once called them – to scents, sunglasses and underwear.

D&G and D&G Junior target progressively younger audiences and are key to the firm's penetration of contemporary youth culture, especially that surrounding hip-hop.

As rapper Lil Wayne says in Money On My Mind: "Developed at a young age. Go after what pays / These Gabbana sunshades block the sunrays."