Tonight on the "Ellen Degeneres Show", Madonna will talk about the problem of bullying among young people, particularly to young gay in the USA. Following the numerous suicide Madonna wants to convey a message of tolerance.

Here is what Madonna will speak:

"I am incredibly upset are the teenage suicides have been reported recently due to harassment ... to hear that teenagers take their lives because they are bullied in schools and boarding schools. We talk a lot about the importance of not judging people who are different. Do not judge people who do not fit the mold of what's cool and what is not.

The gay community has been incredibly supportive of me ... I can totally understand the feeling of being isolated and marginalized. I was incredibly lonely being young adolescence. I must say I've never felt for me at school. I was not a sport nor an intellectual. There were no groups where I was, I felt like I was crazy ... u Until my dance teacher, who was also gay, took me under his wing and introduced me to a community of artists and he told me it was good to be different and me led to my first gay party ' 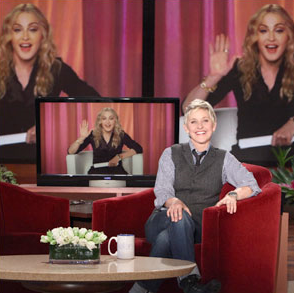 Ellen: "Madonna, I think you're an amazing woman and before I let you go, when will we hear a new album? We expect another album!"

Madonna: "Ellen, do not leave me never leave .."

Madonna: "I am in full manual (WE) and once it's over I put my ass in the studio and make music."