Madonna dropped in to a charity music event at a Kent school, organised by the daughter of Mohamed Al Fayed.

The Lawnfest fundraiser was held on Friday night in aid of The New School at West Heath, Sevenoaks.

Pop star Lemar was the headline act at the event to boost the school's bursary fund, organised by Camilla Fayed.

Madonna's appearance was to help publicise the event, which also included an art exhibition, although she did not perform.

Principal Christina Wells said: "This fundraiser will help grant a bursary for those young people whose lives have been damaged by abuse, bereavement, bullying or other trauma." 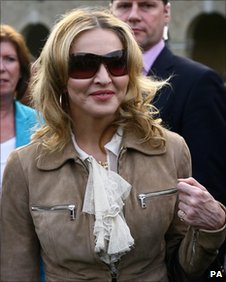