Madonna is my guru

Wendy Shanker has been obsessed with the pop icon since childhood, and even – briefly – became her assistant. She explains how Madonna transformed her life 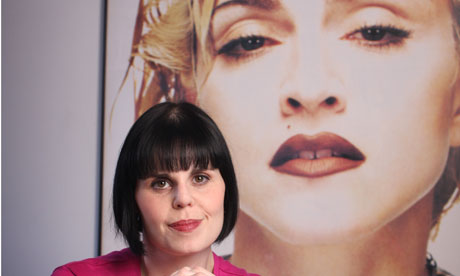 Traditionally, a guru is a spiritual teacher who guides a student on the road to Enlightenment, or finding God. In Sanskrit, "gu" means darkness and "ru" means light. Madonna is my guru.

Relax: I'm a fan, not a fanatic. I don't think she's channelling messages from the Almighty while dolled up as Evita Peron. Besides, I'm Jewish. My people don't worship idols, pop or otherwise. But I disagree with anyone who dismisses Madonna as a pop diva with revolving boyfriends and an obsession with her glutes. For more than a quarter of a century, she has entertained and enlightened us – and now a new generation is becoming M-powered.

The Power of Madonna soundtrack from the hit TV series Glee has put her back at No 1 in the charts again. The kids on the show weren't even born when she first hit the scene, but they all know her as an "icon" and a "Hall of Fame MILF". In the show, music teacher Will Schuester tells them, "Culturally, Madonna's legacy transcends her music because, by and large, the subtexts of her songs are about being strong, independent and confident, no matter what your sex. More than anything, her musical message is about equality." But perhaps cheerleading coach Sue Sylvester – like me, a Madonna obsessive, whose performance of the song Vogue is now a YouTube classic – comes closest to nailing that guru vibe when she says, "Madonna. Simply saying the word aloud makes me feel powerful."

Life is a mystery

At the beginning of her career, Madonna was that naughty girl with the belly button vamping around on MTV. As I watched her grind on a giant boom box on The Virgin tour in 1985, it occurred to me that I was a pre-teen with a lot to learn.

Then I discovered that Madonna, like me, was born and raised in Michigan. That her mother died at an early age, as mine did. That she, too, had an authoritative father. I couldn't relate to her Catholicism, but as a Jew, I shared her turbo-powered association with guilt.

I started to dress with the M-vibe: cut-up sweatshirts, bright leggings, fluorescent lacy bows in my Aussie sprunch sprayed hair. My dad made me take off an Egyptian ankh I wore to school one day. He said it looked like a crucifix.

I saw Madonna perform again on her Blond Ambition tour, during my freshman year at the University of Michigan (the same school Madonna attended, before dropping out to seek fame in New York City). She wheeled around in her whip braid and cone bra, humping the bed and tonguing her dancers. By the time she pranced, Fosse-style, over mirrored chairs and triumphantly sang, "Keep it together . . . forever and ever!" I was a goner.

Was it fascination, or an obsession? In the spring of 1993, I took a page from the Madonna playbook and moved to Manhattan myself, hoping to find my future there . . . and maybe even the Girl herself.

Everyone must stand alone

A month later, I saw her up-close for the first time. My dad and stepmother were in town staying at the Plaza Hotel, where a premiere party for Sleepless in Seattle was being thrown. At the time, "Mo" was BFF with "Ro" (the actor Rosie O'Donnell) and showed up to support her pal. Her dark-rooted, strawberry-blond hair was tautly pulled into pigtail braids. She wore a red dress made from what looked like an Adidas jogging suit, and a man's jacket around her tiny shoulders.

Irrationally, I wanted to cry. It felt like the punch I'd get from seeing my mother in person, even though she'd died when I was a girl. Not that my (non) relationship with Madonna had any connection to my mother – did it?

I couldn't bear gawking with everyone else. My forceful father noticed my suffering, and proceeded to do The Coolest Thing Ever. He ran up to his hotel room, and returned carrying a portable police scanner that looked like a walkie-talkie. (Precisely why he was travelling with a portable police scanner is another story.) He grabbed me and pulled me through a discreet door that led to the Plaza's kitchen. We wound past ovens, refrigerators and bustling cooks, as he pretended to confer on the walkie-talkie and muttered, "So sorry, miss. There must have been some confusion. We'll get you in there right away." He pushed open another door – and we were at the bash.

Hello, Meg Ryan! What's up, Tom Hanks! But Madonna had disappeared. Of course, I don't know what I'd have said had she actually been sitting there, snapping gum and dishing about bisexuality with Rosie. My dad and I waved to our astounded family members, their faces still pressed to the other side of the glass. We each grabbed a gift bag (I still have my cute Sleepless in Seattle nightie) and exited through the red ropes in the lobby. There's a saying that when the student is ready, the teacher appears. Apparently, I wasn't ready yet.

I hear you call my name

In October of 1993, I saw The Girlie Show at Madison Square Garden. Tickets weren't hard to scrape up: Madonna had been dismissed as a super-slut after her unholy trinity of Erotica album/Sex book/Body of Evidence film. She'd recently appeared on Late Night with David Letterman, wearing combat boots and swearing like a sailor (Oh Dave, how the tables have now turned). Madge's sexcapades left me feeling ambivalent, too. I hoped seeing her again would clarify my confusion.

Here's what I wrote in my journal that night: "Just saw The Girlie Show at MSG. Felt proud of Madonna, but distant too. She looked beautiful, never sang better. 'Rain, feel it on my fingertips . . .'"

The next day, a friend scored a single ticket for the last MSG show on the tour. Did I want to go again, by myself? Why not? And here's what I wrote afterwards:

"I CAN DO ANYTHING. I AM SO STRONG. I CAN FILL UP MADISON SQUARE GARDEN AND SING AND DANCE AND TELL JOKES – THE WORLD CAN HEAR ME AND LOVE ME! ONLY I CAN STOP MYSELF. BUT I'M NOT GOING TO. EVERYBODY IS A STAR [Madonna's closing line from the show] AND I AM THE BIGGEST AND BRIGHTEST OF THEM ALL."

It had finally dawned on me what was at the heart of my fascination: Madonna could show me the way to my heart, my spirit and myself. I just didn't know you called that a "guru".

I wangled my way into an assistant job at MTV, despite not being able to tell Pearl Jam from Nirvana. And a year after I started, my boss pulled a few strings and got me my dream gig: I would serve as Madonna's talent liaison at the 1994 Video Music Awards.

Curiously, when I finally met her, I felt completely calm, totally prepared. She was shockingly petite. Her eyes were a light, clear blue – in all the pictures I'd seen of her, I had never noticed their true colour. Managers, assistants, publicists, bodyguards and label reps surrounded her. A slew of producers assaulted her with instructions. In frustration, she turned to me and said, "I want YOU to know everything."

Now I like to think she was giving me her blessing ("I want you to") and offering me the wisdom of the world ("know everything"). In reality, she was ordering me to keep track of the details that would keep the night running smoothly. I swiftly guided her through Radio City Music Hall. I lined up the Spice Girls outside her dressing-room door (after their audience with their idol, Ginger squealed: "Oh my God, we just met MADONNA!" as they all hopped around on their platform boots). Madonna barely paid attention to me. She couldn't. Everyone wanted something from her. Every move had to be calculated.

The next time I saw her face to face was in 2000, when I was hosting a women's cable show and she was promoting her film, The Next Best Thing. Madonna had changed the role she played from a swimming instructor to a yoga teacher, reflecting the eastern spirituality she'd explored in the album Ray of Light. I thought I caught a gleam of recognition in those bottomless blue eyes. As a producer clicked a stopwatch to start our three-minute interview, Madonna leaned forward to whisper something in my ear. "Go ahead," she told me, "be brilliant."

Be brilliant, Wendy. Say something incredibly witty and memorable. About a yoga movie. In three minutes. The stopwatch clicked ominously. A cameraman rolled his eyes as I hesitated. And then I realised – Madonna wasn't commanding me to be brilliant, she was giving me permission.

From then on, I followed her advice. Be brilliant, bright and confident. Speak up when superiors take credit for your ideas. Demand respect if a man tries to make you feel small. Work hard, and take the risk. I tried to bring "brilliance" to my career and my relationships.

Then I got really, really sick. Back in 1999, I'd been diagnosed with a rare auto-immune disease called Wegener's Granulomatosis, in which the body unwittingly attacks the sinuses, lungs and kidneys. At the end of 2003 it flared up again, forcing me into intense treatment with steroids and chemotherapy. I swore I wouldn't become one of those people who gets ill and discovers The Importance of Life – but I couldn't help asking myself some big questions. And, after modifying the directives of western doctors and embracing some eastern alternatives, I began to heal – so I travelled the world to see Madge in concert.

During each show, I'd have a moment when I would feel an almost religious ecstasy as I bounced along to Into the Groove, or crooned What It Feels Like For a Girl. In 2006, I returned to Madison Square Garden for the Confessions on a Dance Floor tour, feeling so grateful to be in a body that was strong enough to twirl around. As we revved up to the chorus of Ray of Light ("And I feel . . . like I just got home!"), I hit the spiritual jackpot. The expanse of the Garden, every seat in the house, radiated with golden light.

As Madonna gets older and writes more of her own songs, her artistic vision matures. I often wonder if her love songs are written about a man in her life, or a bigger spirit that envelops all of us.

I think Madonna is still searching for her (inner) guru. It shocks me when she's criticised for changing and reinventing herself. What, she was supposed to remain a sex-crazed dance machine, power-hungry exhibitionist, ambient earth mother, lady of the manor, charitable Kabbalah scholar, or African adoptive mom for ever? We all evolve – Her Madgesty just does it on a bigger stage, with a better wardrobe.

A guru is like a parent who raises a child to flourish on her own. What values does Madonna impart to us? Female empowerment. Body consciousness. Religious and sexual tolerance. Cycles of imperfection and improvement. Evolution of the self. You got a problem with that?

Sure, it's possible that Bruce Springsteen could direct you towards your true purpose ("Baby, you were born to run"). Or U2 – though I reckon they still haven't found what they're looking for. Bono once called Madison Square Garden "rock and roll's great cathedral", and more than once I've had an ecstatic experience there – thanks to my guru. Maybe, all this time, Madonna has been guru-ing you too, and you just didn't know it.

Wendy Shanker is the author of The Fat Girl's Guide to Life. Her new book, Are You My Guru: How Medicine, Meditation & Madonna Saved My Life, will be published in September. wendyshanker.com