Celebrity acting coach Susan Batson will be auctioning off a slew of incredible pieces her pupils have given her over the years, among them an autographed pair of red platforms that Madonna wore during her 'Drowned World' tour in 2001.
According to WWD, Batson has worked with talents including Nicole Kidman, Jennifer Connelly, and Jamie Fox, and is holding the auction through December 12 at her Black Nexxus Inc. theater lab (300 West 43rd Street) to raise money for a scholarship fund for study at the theater.
In addition to the Material Girl's epic sandals (which are signed 'Love Madonna' on one shoe and 'If the shoe fits wear it' on the other), the auction items include an original script from the first episode of '30 Rock,' autographed by Tina Fey; a peacoat designed for Janet Jackson's 'Velvet Rope' tour; and even pieces donated by Liv Tyler and Alicia Keys.
Be warned: Bidding starts at $15,000, and we'd predict the prize red platforms go for much more than that. 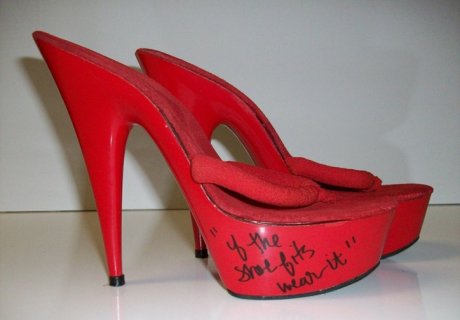