A Brancusi Masterpiece, Mired in a Custody Fight

Nothing says simplicity like the sculpture of Constantin Brancusi, the Romanian-born early modernist known for paring subjects down to their barest essentials. 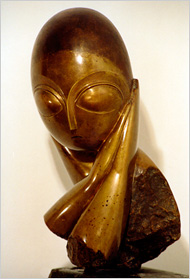 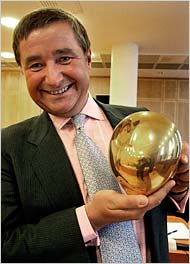 Christen Sveaas, a collector pursuing a claim to “Mademoiselle Pogany,” right, with another Brancusi he owns, “Prometheus.”

But now a 1913 version of one of his most celebrated works, “Mademoiselle Pogany,” a bronze bust of a young woman spare and streamlined as an egg, has ignited a baroque custody battle being waged in courtrooms in Manhattan, Oslo and Paris.

With two high-profile collectors committing millions to a bitter struggle over the prize, the legal dispute has widened a rift between elderly brothers whose family owned the statue for nearly a century, and recently led to the disappearance of the masterpiece itself.

“This is going to take a long time,” said Christen Sveaas, a Norwegian art collector, who is suing to enforce a 2007 contract that he believes makes him the owner of the piece.

At issue is an 18-inch bust that depicts a blank-eyed woman with slender hands cushioning her face in delicate repose. It is one of several versions Brancusi made in marble or bronze, all modeled on Margit Pogany, a Hungarian artist who posed for him in Paris. (Another is at the Museum of Modern Art.)

Claimed by Romania as a national treasure worth as much as $100 million, the statue is believed to be in storage, placed there by the other of its disputed owners, a holding corporation tied to David Martinez, a New York financier and art collector.

Mr. Sveaas and the corporation each maintain that the statue was sold to them in 2007 by the brothers Alexandru and Alvaro Botez, who are originally from Romania. The brothers say the bronze came into their family in 1914, when Brancusi gave it to their maternal grandparents, Romanian artists who were friends of his.

In 1976, the family lent the piece to the National Museum of Art of Romania for a two-month exhibition. But the government refused to return it, claiming it as cultural patrimony. It took more than two decades, a lawsuit and an order from Romania’s highest court for the family to secure its return in 2000. In the interim, the Botez brothers bought the bronze from their uncle in 1992.

By this time, the brothers had emigrated from Romania — Alexandru to Oslo, where he worked as an architect, and Alvaro to Paris, where he struggled as an artist.

They then offered the bronze for auction at Christie’s in New York, but it was withdrawn after objections by the Romanian government.

In 2005, the brothers tried again, negotiating to sell the piece to Mr. Sveaas, 53, owner of a Norwegian investment company with vast holdings in shipping and real estate. He already owned a Brancusi, “Prometheus.”

When a sale appeared imminent in 2007, the Botezes deposited the bronze in a Paris bank vault for safekeeping. But differences over the sale aggravated longstanding tensions between the brothers, according to a ruling by a judge, Yngvild Thue, in Norway, where Mr. Sveaas later filed suit. Alvaro, now 65, needed money and favored a quick sale, Judge Thue found. Alexandru, now 72, favored waiting, so that time might erase Romanian claims to the statue and make it more valuable. But he agreed to go along, according to the court papers.

In July 2007, Mr. Sveaas signed separate contracts to buy the statue from the brothers. In one, with Alexandru and his two children, he agreed to pay $7 million for one half of “Mademoiselle Pogany,” with additional money to be paid if all Romanian claims were finally dismissed.

Under a separate agreement signed by Alexandru’s daughter, Mr. Sveaas agreed to pay Alvaro $5.6 million for his half of the bronze. Alvaro, though, became miffed at his smaller share, according to Judge Thue, and within days had repudiated the contract, saying he had been misled about the negotiations and had not given his niece the power to sign for him.

Given the problems with the Sveaas deal, the brothers renewed negotiations with another buyer that had expressed interest in the piece, Studio Capital, a Belize-based corporation identified in court papers as a “shell company and alter ego” for Mr. Martinez, 52, a Mexican-born debt trader.

He is reported to have paid a record price for a contemporary painting — $140 million for a Jackson Pollock in 2006 — and spent nearly $55 million in 2004 and 2005 for penthouse apartment space in the Time Warner Center.

In August 2007, to help close the deal with Studio Capital, Alvaro Botez and the statue traveled to Switzerland, where a New York art dealer who represented Mr. Martinez, Dominique Lévy of L&M Arts, inspected it.

A week later, without telling Mr. Sveaas, the Botezes sold the statue to the corporation, which paid the brothers roughly $7 million each. In addition, if Romanian claims are cleared within six years, Alexandru would be paid half the market price of the statue, less the $7 million he already received. Court papers say Ms. Lévy estimated the sculpture’s value at $38 million.

Studio Capital also agreed to reimburse the Botezes up to $420,000 against any claims by Mr. Sveaas.

For facilitating the sale, Ms. Lévy was paid a commission of $980,000 through what Mr. Sveaas’s court papers called “an offshore account” in Belize. She did not return calls for comment, but said in court papers that there was nothing inappropriate about her role in the transaction. Since the Botezes turned over the statue, it has not been seen. Mr. Martinez and Studio Capital have declined to comment on the bronze or its whereabouts. 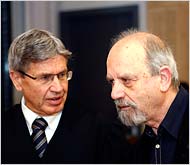 Alexandru Botez, right, with his lawyer Erik Keiserud, is one of two brothers in the battle.

When he learned of the sale, Mr. Sveaas responded by suing the brothers in Norway and Mr. Martinez and associates in State Supreme Court in Manhattan.

He also obtained a court order in Paris in 2007 requiring the Botezes to produce the sculpture and redeposit it for safekeeping. When they did not, they were fined up to $11,000 a day by the court, but the penalty has been stayed pending appeal.

Last month, the judge in Oslo issued a 47-page ruling that said Mr. Sveaas had a right to half ownership based on the contract he signed in 2007. (Mr. Sveaas said he planned to appeal to win the right to the entire piece.)

The judge also awarded him $1.5 million in damages for bad-faith negotiating by the Alexandru Botez side, asserting that had they not concealed Alvaro Botez’s repudiation of the first contract, Mr. Sveaas might have salvaged the deal.

Asked for comment, Timon Botez, responding for his father, Alexandru, called the judge’s ruling “a difficult read” and said, “We are naturally very disappointed.”

He said Mr. Sveaas did not get all he had sought, and added: “We have spent over 30 years defending our rights to this statue, a fight that is not over yet.”

Alvaro Botez declined to comment, as did Mr. Martinez and Ms. Lévy.

In the ruling, Alvaro was absolved of wrongdoing. “The judge did decide Sveaas had a contract with Alexandru,” said Donald J. Kennedy of Carter, Ledyard & Milburn, which represents Mr. Sveaas.

Now, Mr. Sveaas is pushing forward with his case in Manhattan, where he has accused Mr. Martinez and Studio Capital of “tortious interference” in his contract to buy the statue. He is seeking $40 million in actual damages — his valuation of “Mademoiselle Pogany” — plus $40 million in punitive damages.

In court papers, Studio Capital said that Mr. Sveaas never had a binding contract with both Botez brothers, so there was nothing to sabotage, and that winning the statue amounted to “the definition of economic competition.”

These days, Mr. Sveaas tries to be content with visits to the “Mademoiselle Pogany” he can see — at MOMA. “I do it every time I’m in New York,” he said.